There’s a topic here for a social psychologist or a sociologist, I think. I’m neither one, but here’s how it looks to me.

Social annoyance and public griping reinforce one another.

By social annoyance I mean a distaste for the way someone looks or acts that sees its object as an instance of a type. Someone’s appearance or behavior gets under your skin, and it’s not just that particular person, it’s the whole class of people who look like that or act like that. And usually it’s not just a random set of people, it’s kids today, or jocks, or German tourists, or 30-something suburban women in Hummers, or those people who hang out with so-and-so. You associate the irritant with some salient combination of social features: race, ethnicity, age, sex, class, location, occupation, clique.

By public griping I mean the process of sharing your annoyance with a sympathetic group. You might trade anecdotes around the coffee machine or the dinner table, or write a letter to the editor. People enjoy listening in groups to skillful expressions of social annoyance, and so stand-up comedians do a lot of this. Cartoons and newspaper columns often express similar feelings, and allow you to join in by putting a clipping or printout up on your refrigerator or your office door. These days, you might send a copy to your friends by email, or chime in on your weblog.

In some places and times, linguists might have been presiding over the speech and language sessions of this ritual reinforcement of group identity. But these days, our reaction is generally to observe that most of the gripes are arbitrary and many of the explanations are false.

Linguistic sins, real or imaginary, are not really what’s driving this process. And the original emotion of irritation, though sometimes expressed in colorful displays of (mock?) disgust and anger, is also secondary, I think. The real key is the public ritual that Christopher Howse called “naming and shaming”, which helps the group to converge on a set of norms. (While giving everyone a good deal of pleasure along the way, apparently.)

As we gripe-debunkers relentlessly demonstrate, these aren’t the usual norms of linguistic usage. They’re not even the norms of the standard language or the norms of elite users. These days, those accused of offending against these odd, artificial norms are as likely to be high-status people — politicians, business managers, journalists — as members of (linguistically) lower-status groups — blacks, young people, Americans, athletes.

(Read the rest & many of the examples at the link below)

via The social psychology of linguistic naming and shaming | Language Log

“I don’t know what it is about me that makes people think I want to hear their problems. Maybe I smile too much. Maybe I wear too much pink. But please remember, I can rip your throat out if I need to, and also KNOW that I am not a hooker. That was a long, long time ago.” 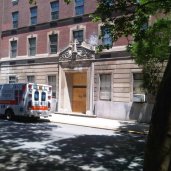 …is trying to salvage my ‘balcony garden’ from the ravages of the great Squirrel Wars 2010 – don’t you worry sucka(s), this will be the year I catch you and your little dog too, and whip you good.

Thinks I could get down with some Fahrenheit 451 on some ‘stylebooks’ (*esp. AP Stylebook*) right about now…

translates to “i  ❤ you Bauhaus”