“The law is an accumulation of tireless attempts to block a man’s desire to change life into an instant of poetry. Certainly it would not be right to let everybody exchange his life for a line of poetry written in a splash of blood. But the mass of men, lacking valor, pass away their lives without ever feeling the least touch of such a desire. The law, therefore, of its very nature is aimed at a tiny minority of mankind.”

Anyone who writes down to children is simply wasting his time. You have to write up, not down. Children are demanding. They are the most attentive, curious, eager, observant, sensitive, quick, and generally congenial readers on earth. See full quote after the jump.  END_OF_DOCUMENT_TOKEN_TO_BE_REPLACED

“There is nothing more difficult to define than an aphorism.”

“There are more books in the world than hours in which to read them. We are thus deeply influenced by books we haven’t read, that we haven’t had the time to read.” END_OF_DOCUMENT_TOKEN_TO_BE_REPLACED

Behind the façade of this literary Potemkin village, the mainstream of American poetry, with its sources in Baudelaire, Lautréamont, Rimbaud, Apollinaire, Jammes, Reverdy, Salmon, and later Breton and Éluard, has flowed on unperturbed, though visible only at rare intervals between the interstices of the academic hoax.

END_OF_DOCUMENT_TOKEN_TO_BE_REPLACED

NOTE: ‘26 Min Read: and worth every second of it if you are a Toni Morrison fan, or a writer. Indispensable bits of advice, encouragement, and life lessons woven together to create a thrilling read. Please read the whole thing…

The difference between someone who writes and a writer is real,’ she said. ‘A real writer trusts their inspiration, but they edit. They approach what they’ve written as a stranger. If you can’t look at your own work with fresh eyes, with those of your readers meeting your book for the first time, you will never succeed.’ I practiced this. I read my work out loud to myself and when my tongue tripped I stopped and backed up and fixed the offending words. I had checklists that I used after each chapter, each scene: (What does the reader already know? What don’t they? What do they need to know? When do they need to know it? How fast does this feel? How slow?).

END_OF_DOCUMENT_TOKEN_TO_BE_REPLACED

New York City is the most fatally fascinating thing in America. She sits like a great witch at the gate of the country, showing her alluring white face, and hiding her crooked hands and feet under the folds of her wide garments,—constantly enticing thousands from far within, and tempting those who come from across the seas to go no farther. And all these become the victims of her caprice. Some she at once crushes beneath her cruel feet; others she condemns to a fate like that of galley slaves; a few she favors and fondles, riding them high on the bubbles of fortune; then with a sudden breath she blows the bubbles out and laughs mockingly as she watches them fall.

The Autobiography of an Ex-Colored Man, 1912

END_OF_DOCUMENT_TOKEN_TO_BE_REPLACED

Man is so made that when anything fires his soul, impossibilities vanish.

END_OF_DOCUMENT_TOKEN_TO_BE_REPLACED

Ballard was an eager advocate of science fiction at the start of his career as an alternative to the conventions of the 19th century realist novel, which he saw as being ill-equipped to deal with an emerging post-war society in the West that was “ruled by fictions of every kind—mass merchandising, advertising, politics conducted as a branch of advertising, the instant translation of science and technology into popular imagery, the increasing blurring and intermingling of identities within the realm of consumer goods, the preempting of any free or original imaginative response to experience by the television screen.” Reality had become so hard to decipher in the external world, the inner world of the self so fragmented, that the author could no longer claim to faithfully reproduce it naturalistically on the page. Science fiction of a type that sought to explore inner, rather than outer space (“Earth is the only alien planet,”) was a form that had a better chance of getting at the truth of late-20th century existence. No journeys to distant galaxies, no time-travel. The type of SF stories he approved of were “extrapolations of the immediate present, nightmares at noon earned from the abrasive dust of the pavements we all walk.” He liked to think of himself as a kind of scientist and his stories as laboratories where he could test a hypothesis on his characters in extreme situations and see where it led.

END_OF_DOCUMENT_TOKEN_TO_BE_REPLACED

The exhibitionism of the phallic personality (the huge genital, the royal lingam) is fraudulent; an imposture, or imposition on the public; theater. The actor needs the audience to reassure him he is not castrated: yes, you are the mighty penis; the Emperor’s New Clothes. To force the audience to give this reassurance is to castrate, have coitus with, the audience: the phallic personality needs a receptive audience or womb. Separately, both actor and audience are incomplete, castrated; but together they make up a whole.

END_OF_DOCUMENT_TOKEN_TO_BE_REPLACED

Action is what takes place in front of the camera, with the lights turned on, to throw the rest of reality into darkness…Those for whom not to be seen is nonexistence are not alive; and the kind of existence they seek, the immortality they seek, is spectral; to be seen is the ambition of ghosts, and to be remembered the ambition of the dead. The public realm is the stage for heroic action, and heroes are specters of the living dead.

The passport which grants access to the public realm, which distinguishes master from slave, the essential political virtue, is the courage to die, to commit suicide, to make one’s life a living death. “One must pay dearly for immortality: one has to die several times while still alive” (Nietzsche).

END_OF_DOCUMENT_TOKEN_TO_BE_REPLACED

The human body is not a thing or substance, given, but a continuous creation. The human body is an energy system which is never a complete structure; never static; is in perpetual inner self-construction and self-destruction; we destroy in order to make it new.

(via Google Books or download pdfs at Muse)
END_OF_DOCUMENT_TOKEN_TO_BE_REPLACED

Jack Keourac (technically not his mugshot, but he was arrested)

END_OF_DOCUMENT_TOKEN_TO_BE_REPLACED

“Nothing has become as suspect, ridiculous, old-fashioned, trite, and tasteless in a novel as plot and its farcical exaggerations.”‪ 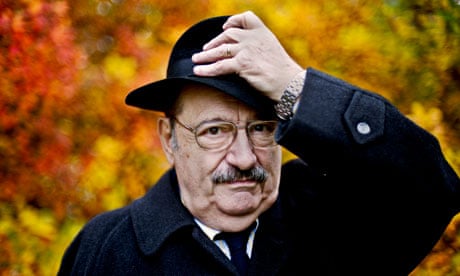 This book might have been intensely irritating. Two European intellectuals meet, and are encouraged by their “curator” Jean-Philippe de Tonnac to show off – for, if they do not put on an exhibition of erudite debate, what is the point of recording them? And show off they do, ranging in their talk from cave paintings to Italian neorealism, from hieroglyphs to computer code, from the 17th-century German Jesuit scholar Athanasius Kircher to Dan Brown, from the teachings of Jesus and Buddha to those of cultists. Reading the jacket blurb, one is inclined to give a hand gesture associated with a four-letter word beginning with “w”. [Read the rest at the link below]

I seem most instinctively to believe in the human value of creative writing, whether in the form of verse or fiction, as a mode of truth-telling, self-expression and homage to the twin miracles of creation and consciousness.