Much has changed in the four years since Colin Kaepernick was last on the cover of GQ. Back then he was a rippling superhero of a quarterback on the rise. But a simple act—kneeling during the national anthem—changed everything. It cost him his job. It also transformed Colin Kaepernick into a lightning rod and a powerful symbol of activism and resistance.

END_OF_DOCUMENT_TOKEN_TO_BE_REPLACED

See more from “Whose Streets? Our Streets!” at Bronx Documentary Center

Whatever befalls the earth befalls the sons of the earth. Man did not weave the web of life; he is merely a strand in it. Whatever he does to the web, he does to himself. Continue to contaminate your bed and you will one night suffocate in your own waste.

END_OF_DOCUMENT_TOKEN_TO_BE_REPLACED

Last Night while you watched TV, hugged your loved ones, tucked your kids in, the Water Protectors at Standing Rock were pelted with rubber bullets, had tear gas fired on them, and then in freezing temperatures had Water Cannons blasted on them. END_OF_DOCUMENT_TOKEN_TO_BE_REPLACED

I experience myself as “I” because I doubt, I protest, I rebel.

END_OF_DOCUMENT_TOKEN_TO_BE_REPLACED 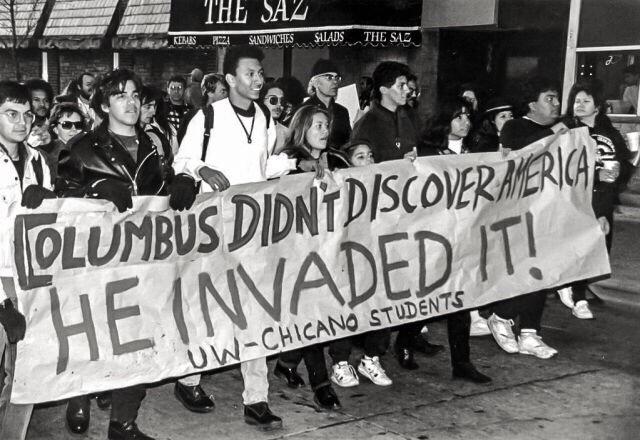 On the Genealogy of Ethics: An Overview of Work in Progress

Tia Williams, left, and her daughter Aissa create a display on the street outside the Minnesota governor’s official residence Thursday, July 7, 2016, in St. Paul, Minn., as people gathered to protest the shooting death of Philando Castile by police.

via Photos of the week | The Undefeated

Huge crowd at Stonewall #NYC in support of Orlando & the #LGBT community.

This is the day in 1935 on 125th Street in Harlem the phrase changed. Up until that point it had been anchored to a different meaning, and the one that some eighty years later we still hear being used in places like Ferguson & with the Baltimore Uprising.

The Riot in Harlem of 1935 changed the paradigm. While its roots & causes were as the commission found afterwards deeply rooted in the very same issues and created a whole new usage of the term which was outlined by the sociologist Alan D. Grimshaw to proclaim the modern form of racial rioting:

Later the eminent philosopher would state:

“the Negro is not merely the man who shouldn’t be forgotten; he is the man who cannot safely be ignored.”